What is it with class distinction?

I mean, think about it. Doesn’t America, the very name inspire the possibility of acceptance and of equality. 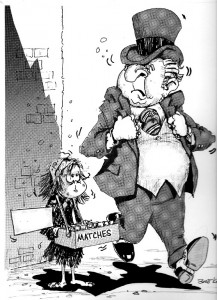 How many times a day do we assess being less than or more than those we meet, associate with or read about at the grocery stand?

Is it a conscious conclusion? They are wearing shabby clothes therefore they must be… poor, uneducated and not worth our respect and consideration.
Or,
Nice suit. Smart man. Rich man. He must be worth…more than me.

I have witnessed the acceptance of people who for generations were thought of as “odd”. And once they acquired money they bought acceptance, but when misfortune occurred (and it always does) than zero tolerance resulted and rejection shortly followed.

It doesn’t’ even seem to matter how one acquires money and power just as long as one maintains it. Do a little research in the powerful families of the United States. The majority of them, well let’s just say, their hands got a little dirty.

And it seems silly but I feel it must be acknowledged, education does not equate to being smart. It really doesn’t. Anyone can study and learn and pass tests and get degrees. But someone somewhere has decided that those who spend time studying are somehow better and more civilized and deserve more respect than those who have equally beneficial life lessons, but, no diploma.

And we believed it and still do!

This is the final test of a gentleman: his respect for those who can be of no possible service to him. William Lyon Phelps