PAMELA BOWMAN MESA ARIZONA USA — Last night we had another training session in preparation for the feature film shoot. Cyndi was multi-tasking again. She had us set up for an interview. We talked with former student Jordan Pack. Jordan was an animation student who was back for the summer. For the documentary, she wanted to get his take on our opportunity of filming in Zambia as MCC students. He said how he wished he had had such an opportunity and how it could have benefited his career aspirations. 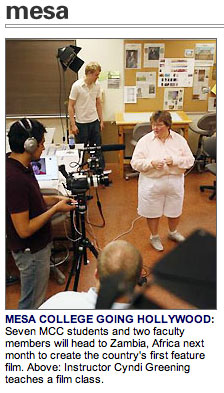 We also had a visit from the ARIZONA REPUBLIC. Their reporter Josh Kelley (and photographer Dave) observed as we got the interview recorded. Josh also commented on what a great opportunity for MCC students to go to Africa and shoot a film. Later, we watched footage from a previous practice shoot. We critiqued our work. We discussed what worked and what didn’t. We examined the lighting, camera angles, sound and editing. It was very beneficial.

Then came the talk.

We have the funding for two (2) faculty and eight (8) students. The problem is there are 15 students and six faculty. That means Cyndi wants to get funding for 5 more students. That’s $15,000.00. If she can’t locate funding, that’s five students who have dedicated their thoughts and actions to this project for the last four months that will not get to go. The question I have (and I am sure the other students have) is, am I one of the 5 who will be left behind? Cyndi calls it Sophie’s Choice (from the William Stryon novel and film that starred Meryl Streep). The dreams and goals of which child lives … and which child dies?

Cyndi explained that the determining factors will be an assessment of our effort, commitment and knowledge. Do we show initiative? Do we have to be told what to do or do we just do it? How do we relate to other crew members? Do we work well as a team player? Are we paying attention to what has to be done and thinking of ways to accomplish it? How skilled and proficient are we with all of the cameras, lights and tools? If we don’t know how to do something do we figure it out, ask questions, read up on it or let it become someone else’s problem? Are we open to the cross training Cyndi is providing for us?

Most everyone works well as a team. Certainly many hands make light work. The hardest part for those left behind will be knowing the contribution that could be made if he/she were able to go. Each of us wants to go desperately. We might even think we deserve to go for the effort we’ve put in, but that doesn’t mean we can go. Even though we have unlimited energy, determination and passion, there is a limit to how many plane tickets we can afford.

As I wait to see if the funds come in, I will ponder on what Henry David Thoreau said, “If one advances confidently in the direction of his dreams, and endeavors to live the life which he has imagined, he will meet with a success unexpected in common hours.” I await the meeting in the common hours.