BY PAMELA BOWMAN, MESA, AZ, USA — “A non-doer is very often a critic — that is, someone who sits back and watches doers, and then waxes philosophically about how the doers are doing. It’s easy to be a critic, but being a doer requires effort, risk, and change.”  Dr. Wayne W. Dyer

I am sure that many who heard about the film Zambia project were skeptical. Many of the people I talked to seemed leery and even confused as to why I would want to go to Zambia to shoot a film. Certainly it seemed exciting and adventurous, but many expressed concern, fear and even criticism for our naïve enthusiasm and high goals and ideals. Many tried to discourage us by pointing out the obvious concerns that we tried to bury in our minds before we left. I was fearful of the unknown. But I really thought 14 students led by 4 faculty could accomplish our goals. I suppose that was arrogant, but it also was brave. We were willing to go and do what no one had gone and done before. 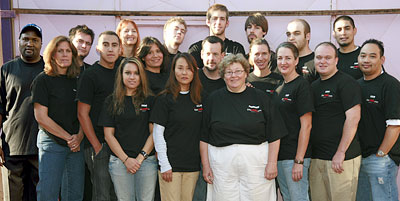 In reflection we wanted to support a fellow classmate with a dream to remember and honor not only his son, but all children who die prematurely. For me, that could best be accomplished through education and economic change. I was intrigued by the possibility of establishing a new industry in a third world country. We would often discuss the potential for future employment for Zambians and also to develop an art form in Africa. As digital artists we truly appreciate art and it’s contribution to the world society. I believe art in any form promotes thinking and problem solving and self- expression.

So three months after returning from Africa we are in the editing process. Our lofty goals have all been forgotten as we return to our daily activities of work and family and friends. We have discussions on what it was like before and during and after. We remember and feel badly that we didn’t have the impact for change except with in ourselves. Then we received the news that Mulenga Kapwepwe, our contact from the Zambian National Arts Council, has been running a cultural support program (including film, art and music) that was recognized by the European Union. Because of how well the program was run, Zambia is one of the top five countries chosen for ACP funding! They will have access to over EIGHT MILLION DOLLARS for continuing development of film. We have been asked to write a proposal to access funding and support future filmmaking!