In The Dark and In the Light

BY PAMELA JO BOWMAN – MESA ARIZONA – This 52 year old widow graciously allowed our film crew to set up our equipment and shoot a scene in one of the three rooms in her home. Laying in the corner of the room, on a thin mattress, was one of her six children, a son. 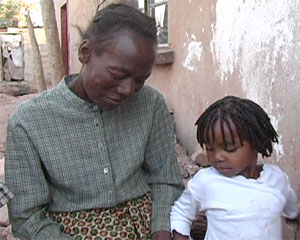 He was a young man, probably in his early twenties. He was so small and thin he seemed more like a child than a man. He was dying. One of the actors told us that at one time he was a vibrant young man, full of life and mischief. I spoke with this woman about her life, her dreams, her hopes. She professed not to have any. I asked her if she was happy. “No, I am not. I have so many problems.” She has lived a hard life providing for her family. She lives day to day, but she lives. After the shoot, Cyndi offered her financial compensation for her home, a “location fee.” We were told the family could live for a year on that location fee. We also gave her two bags of candy to pass out to the neighborhood children. It was then that we saw a smile beneath her sad eyes. We have been back in the U.S. for many months but this woman’s eyes still haunt me in the darkness and in the light.