SIRS, A QUESTION IF YOU PLEASE

I have a question for President Obama and Governor Romney. 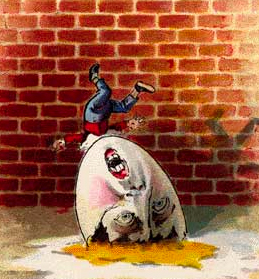 Humpty Dumpty straddled a wall. With pushing and pulling and gnashing of teeth, Humpty Dumpty had a great fall. How are you going to put humpty Dumpty back together again?

I could ask you about our economy, Syria, health reform, abortion, religion, outsourcing, and education. And you will have an answer, but your answer won’t matter.

It won’t matter until the chasm that began in 1792 and became clearly established with the election of 1824 is… fixed, filled in, reduced, bridged or leveled.  But that won’t happen.  For the last 220 years both parties used the human condition; loneliness, freedom, mortality, concerns with meaning, the need to belong and fear to lead their particular flock toward their particular agenda.

We hear the rhetoric of bi-partisan efforts, crossing over to the other side to work … with the enemy.

But there will be no working with the “enemy”. The opposing party will do everything in their power to decimate the efforts, character, goals, agenda and power of whoever holds office.

Ross Baker, a political scientists at the State University of New Jersey – Rutgers said  a few years ago, “ People, for example, are asking fundamental questions about the role of government, and there’s nothing wrong with that. It’s the vehemence. It’s the personalization. It’s the search for immediate political advantage. It’s the volume and intensity of conflict.”

Now the conflict is louder, meaner and more calculated. 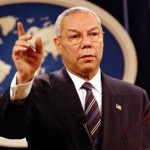 So, sirs, back to the question you won’t answer because you can’t. The situation has escalated to the point when Americans literally hate other Americans who have a different political affiliation.  I am reminded of a quote from the movie, The American President, “Let’s see you acknowledge a man whose words make your blood boil, who’s standing center stage and advocating at the top of his lungs that which you would spend a lifetime opposing at the top of yours.” Is it possible to acknowledge a man or a woman with opposing views with any degree of respect and common courtesy? Or does differences quite naturally lead to disregard, disrespect and dispise?

I fear the latter because unfortunately, I’ve seen it. I’ve felt it. I’ve experienced it.

I have seen children cry as they wish this election to be done and over. They want the fighting and arguing to stop. I’ve talked with wives who are seriously considering divorce because their husbands have become so embittered toward the “other party” that their life consists of searching the news stations, the media, the internet for any and every story to justify and feed their hate.  I have seen young influential adults jump on the current band wagon, adopting the philosophies of men filled with anger and hate and disregard the teachings of the golden rule; love, tolerance and respect for all human beings. 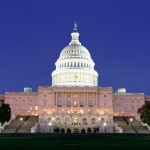 Washington will not be able to approach a bi-partisan agenda because whoever “the enemy” has become after this election, won’t let them. It’s against their agenda. It’s against what Americans were raised to be, partisan. And I believe you both know that. Deflection works, but it doesn’t answer the question.  How are you going to tear down the road block, that you helped build to get elected, to get us where you said we would go?

The end does not justify the means. We are in stalemate. No one will gain the victory even though someone will win the election. Next week as one party celebrates, the other party will begin their offensive tactics. They will prevent bills, laws or agendas from progressing. They will smile smugly and remind everyone loud and clear.

“We told you so. We knew they would fail”

And when they fail,  that will bring some sort of satisfaction.